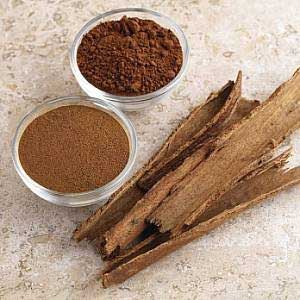 For today’s post, I happened to find an interesting article that was just recently published in the medical journal, Diabetic Medicine:  A Journal of the British Diabetic Association regarding the health benefits of cinnamon supplementation.  No, I’m not talking about Cinnamon toast, or the cereal called Cinnamon Toast Crunch either…

Researchers in London conducted a study involving 58 patients with type 2 diabetes (25 males, 33 females) over a period 12 weeks.  For inclusion in this study, the participants had to have a Hemoglobin A1C level of greater than 7%.  Hemoglobin A1C is a marker of long-term glycemic control in those who have diabetes.

Here’s a simple description of HBA1C from Medicine.net:

To explain what an A1c is, think in simple terms. Sugar sticks, and when it’s around for a long time, it’s harder to get it off. In the body, sugar sticks too, particularly to proteins. The red blood cells that circulate in the body live for about three months before they die. When sugar sticks to these cells, it gives us an idea of how much sugar has been around for the preceding three months.

In most labs, the normal range is 4-5.9 %. In poorly controlled diabetes, its 8.0% or above, and in well controlled patients it’s less than 7.0%. The benefits of measuring A1c is that is gives a more reasonable view of what’s happening over the course of time (3 months), and the value does not bounce as much as finger stick blood sugar measurements.

For the randomized, placebo-controlled intervention in this study, subjects were given either placebo or 2g of cinnamon per day for the duration of this study (12 weeks).

What did the researchers find?

“Intake of 2g of cinnamon for 12 weeks significantly reduces the HbA1c, SBP and DBP among poorly controlled type 2 diabetes patients.

Cinnamon supplementation could be considered as an additional dietary supplement option to regulate blood glucose and blood pressure levels along with conventional medications to treat type 2 diabetes mellitus.“

Previous research by a group in Germany (Mang et al, 2006) found that a cinnamon extract corresponding to 3 grams per day of cinnamon had a moderate effect on lowering blood sugar levels in poorly controlled diabetics (who continued their medication) after 4 months of supplementation.