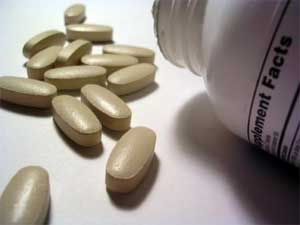 Glucosamine is a commonly used ingredient in many dietary supplement products formulated for promoting joint health.  If you are considering using a glucosamine supplement, make sure that you read the supplemental facts on the back.

Glucosamine sulfate is the most researched salt of glucosamine though it typically costs a little more than the others.  For those that have diabetes or are just concerned about the potential effects of glucosamine on their blood sugar levels, a recent review article was published in the journal, Diabetes/Metabolism research and reviews [1].

As some brief background, there have been some theoretical concerns that supplementing with glucosamine could have an impact on your blood sugar levels.  The reason for this is that glucosamine itself is an amino sugar.

This article which represents a comprehensive review of the available literature concluded that glucosamine did not have adverse effects on blood sugar in those with diabetes or pre-diabetes:

…based on available evidence, we conclude that GlcN (glucosamine) has no effect on fasting blood glucose levels, glucose metabolism, or insulin sensitivity at any oral dose level in healthy subjects, individuals with diabetes, or those with impaired glucose tolerance.

Typical doses used in studies involving glucosamine are usually either 1500 mg per day in a single dose or in three divided doses of 500 mg each.

As above, the study authors concluded that oral glucosamine supplementation (at typical doses of 1500 mg/day) had no effect on:

Included in this assessment were healthy volunteers as well as diabetics and those with impaired glucose tolerance (pre-diabetes).

The conclusions of these study authors are of particular importance because of the comorbidity between diabetes and arthritis.

Is Glucosamine Safe for Diabetics?

Though Glucosamine appears to be safe for use in those with diabetes, you should still ensure that you monitor your blood sugar levels regularly. As well, for those who’re taking Coumadin (Warfarin), you should NOT use glucosamine since this can increase your risk of bleeding from this medication.